Merry Christmas and Happy Holidays, friends!  We Seitz’ like to make each other laugh and Mad Libs are just about the funniest activity for a family to do, the sillier the better, so we decided to make a Seitz holiday version for you.  We tested this one out already and we promise it will be hilarious, especially if you throw “butt” in there somewhere.

It was the beginning of MONTH, which meant it was time for the Seitz family to start spreading their Christmas cheer and as any good Elf family knows, the best way to spread Christmas cheer is VERB with ING ADJECTIVE for all to hear while baking Christmas type of DESSERT to share with neighbors who share your affinity for elf culture.

Mama Elf pulled a tray of gingerbread ANIMAL from the oven for Ella and Jolie to frost while Cameron and Maggie sat across the table from each other drinking TYPE OF DRINK tossing PLURAL NOUNS into each other’s mouths.  Suddenly the back door flew open and Papa Elf burst in with the ADJECTIVE snow.

“Today is a ADJECTIVE day for sledding!  Come on kids.  Mama Elf, you too!” he exclaimed, stomping the snow off his boots.

Balancing six mugs of cocoa, Mama Elf followed her family out the door to their sleigh packed with sleds, toboggans, and PLURAL NOUN.  All the way to Mighty Snow Hill, Papa Elf belted out verses of NAME OF SONG while the rest of the family joined in at the chorus.

“I think I’m too old for this,” commented Jolie, the oldest Seitz.  “I’d rather be VERB WITH ING guitar, performing with my Showchoir, VERB WITH ING around with my friends or creating some amazing NOUN than sledding.”

“Well, I could be baking TYPE OF FOOD or cooking TYPE OF FOOD, or swimming, or hanging out at the coffee shop or doing hard math problems,” complained Ella, the second oldest Seitz.

“I love sledding!” crooned Cam, the third oldest.  “I like it just as much as playing the MUSICAL INSTRUMENT or the drums, making YouTube videos, VERB WITH ING soccer, and endless Fortnite battles.

“We’re here! It’s going to be a great day for sledding!” Papa Elf hooted as he tumbled out of the NOUN, grabbing the sleds while Mama Elf made sure hats and mittens were on ADJECTIVE.

Six sleds lined up at the top of Mighty Snow Hill.  Papa Elf plopped down on his toboggan and pulled his NOUN over his pointy PLURAL NOUN.  Behind him, Jolie folded herself onto a saucer sled and grabbed onto her dad’s BODY PART.  Next came Ella and Cam, bundled up like abominable snowpeople on a sled built for NUMBER with their bulky-snowpanted legs wrapped around each other.  Maggie and Mama Elf brought up the rear on inflatable snow PLURAL NOUN and with one giant push from Mama Elf, the train of Seitz’ began to slide slowly down Mighty Snow Hill.  Faster and faster the sleds began to race down the icy, sheet of white, NOUN spraying in the air and stinging their PLURAL BODY PARTS.  Seeing the bump in the snow just up ahead, Papa Elf had no time to warn his family.  Up, up, up went Papa Elf cartwheeling into the air, followed by Jolie grinning from BODY PART to BODY PART. Ella VERB WITH ED with laughter as she and Cam flipped in midair and Maggie plunged into a NOUN.  Only Mama Elf had enough time to roll off her sled gently into the fresh powder.

“Today sure is a great day for sledding!” Mama yelled down the hill to her family and they all VERB WITH ED back up to do it all again.

Now you know what a family outing with us would truly be like.  As for what we’ve been up to lately.  Scott is still happily employed at Wells Fargo, managing a team of six and traveling a bit for work.  In his free time, he builds dining room tables and remodels the office of Jamie’s dreams.  He also likes to pump iron at the Y and coach Cam and Maggie’s soccer teams.

Jamie just finished writing her second novel and she’ll spend the better part of this winter editing and trying to find an agent who can sell them.  She still spends lots of time at the kids’ schools, sings with the worship band at church when she can, and knits way too many scarves.

Jolie can drive now, which is super gross, but also super delightful for getting herself to work, to Showchoir and tennis practices, and around town when she’s performing or hanging with friends. She’s got her own radio show every week, she’s scheduled to play the 80/35 Music Festival in July, and she’s making her own merch in graphic design!  We’ve scheduled her first college visits in Nashville and we’re well aware of how fast time is flying by with this amazing girl of ours (and we can’t talk about it right now- I’m not crying, you’re crying.).

Ella just got her driver’s permit, she’s shaving time off her backstroke and freestyle every day, and the girl can cook and bake!  This summer she made tamales from scratch and she’s perfected the art of macaroons.  Thank God Scott is good at hard math, because Ella has surpassed Jamie in math skills and she’s totally ready to be a freshman next year.  Ella plays the trombone and piano and is pretty darn crafty with a needle and thread and she’s the kindest teenager you’ll ever meet (not to her siblings of course…but everyone else).

Cam started middle school this year and he’s joined all kinds of new clubs: Hyperstream, Mock Trial, and Journalism to name a few.  He’s quick on the soccer field and he’s dipping his toes in the water for the first time on the swim team and loving it.  In the band, he plays the trumpet and he also jams on the drums and piano at home.  He’s an expert in all things electronic and his favorite thing to do it to make videos of whatever he’s doing: dirt biking, gaming, hiking in the mountains, etc.  Everyday this kid cracks our heads off and surprises us with some new skill he’s learned.

Maggie only has one more year in single digits (which again, we’re not talking about).  She is our animal lover and takes good care of Harper and our new kitten, Birdie.  When she’s not jumping on the trampoline or playing with the neighbors, you can find her reading, building with Legos, doing gymnastics, or playing soccer.  She’s all by herself at the Downtown School this year, which is weird and makes us a little sad (and lets just not talk about that either while we’re at it, ok?) but there isn’t much this girl can’t master because she’s crazy smart and she knows so many animal facts, it’s scary.

We’ve had some great adventures this year as a family.  Jolie spent ten days traveling across Italy and Greece, seeing the sights and soaking in all the art and beauty and culture.  Scott and Jamie spent a week in Mexico with no kids, exploring the Mayan ruins at Chichen Itza and drinking tequila and having the time of their lives.  Then we all headed West in July and spent two and half weeks camping at Custer State Park in South Dakota, Glacier National Park in Montana, Mt. Rainier, Mount St. Helen’s, and Seattle, Washington, Tierra del Mar, Oregon before driving all the way back home.  It was a glorious vacation of learning to fly fish, hiking and exploring mountains, forests, glaciers, rivers, trees that reached to the sky, swimming in the frigid ocean and doing it all in our tiny pop-up camper.

We’ve put another 4000 miles and a new transmission on our family truckster, but the experiences we’ve logged this year as we’ve traveled are immeasurable.  We hope your year has been momentous and exciting and full of adventure.

Merry Christmas, Happy Holidays and Happy New Year from our family to yours. 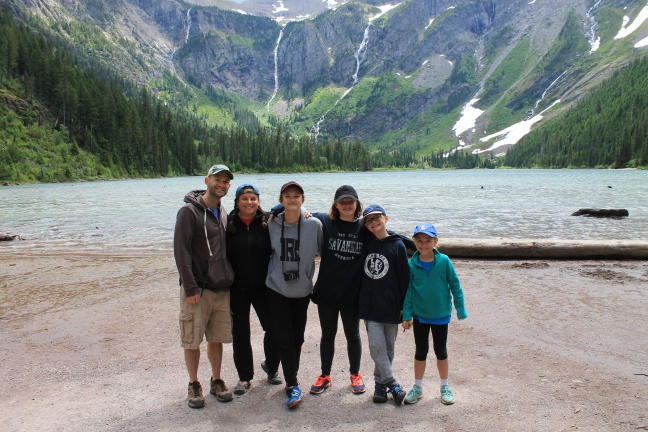